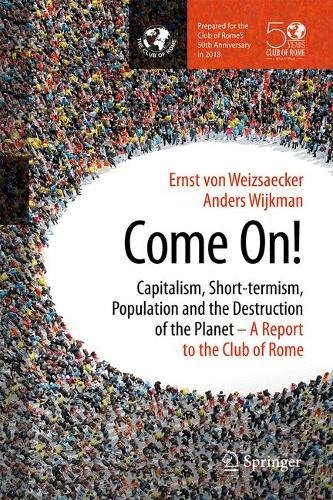 A New Report to the Club of Rome by the Co-Presidents Ernst von Weizsäcker and Anders Wijkman
The human footprint is increasing fast and will – if not reversed – eventually lead to a collapse of the global economy. So say the authors of the new book Come On! which proposes an overhaul in the way that governments, businesses, financial systems, innovators and families interact with our planet.
Now, in cooperation with more than 30 members from the Club of Rome, authors Ernst Ulrich von Weizsäcker and Anders Wijkman, the sitting co-presidents of the Club, suggest possible solutions to the global ecological and social crises. At the core is the suggestion to develop a new Enlightenment for a „Full World”: we can no longer depend on a societal model that was developed for a world of less than one billion people.
[read more=”Read more” less=”Read less”]
Humans and farm animals constitute 97 percent of the bodyweight of all living land vertebrates on earth so it’s not surprising that the remaining 3 percent of wildlife struggles to compete for land and for survival. Alongside an environmental crisis are social, political and moral crises. Billions of people no longer put trust in their governments, poverty has deepened in many countries, in the US the middle-class is rapidly shrinking.
Ernst Ulrich von Weizsäcker argues: “Our shared wellbeing on a healthy planet demands a rethinking of reigning philosophies and a new Enlightenment that could seek inspiration from old traditions.”
Measuring our success on GDP growth has proven inadequate to the task and it also masks a growth in inequality between rich and poor. New indicators such as a Genuine Progress Indicator could more accurately measure economic welfare.
The present model of development is seriously flawed. Profit maximization – under the principle of shareholder value first – and saving the planet are inherently in conflict. The new Enlightenment must be characterized by a vastly improved balance between humans and nature, between markets and the law, between private consumption and public goods, between short-term and long term thinking, between social justice and incentives for excellence.
Advances in technology will be crucial. We need technology disruption in many sectors, not least to curb greenhouse gas emissions. But disruption must be balanced by efforts to support the losers, both among companies and employees.
This book comprises many practical examples, success stories and opportunities for the “Full World”. A move towards a circular economy can help overcome mineral scarcity, significantly lower carbon emissions and increase the number of jobs. Regenerative agriculture will help stop soil erosion, enhance yields and build carbon in the soil. Efforts have to be made to rein in the financial sector by increasing capital reserves and control of money creation. Some insights can come from the Hopi tradition in North America, which developed sustainable agriculture and maintained a stable population size while avoiding wars.
“This book is hard stuff. Politically, it is very uncomfortable. But the fresh and original thought within it should be seen as an invitation to ‘come on’ and join on a fascinating journey of testing new ways to make the full world a sustainable and prospering one,” says co-author Anders Wijkman.
Civil society, the communities of investors, and the research and education communities should become strong players in the necessary transformation.
[/read]

This site uses cookies. By continuing to browse the site, you are agreeing to our use of cookies.

We may request cookies to be set on your device. We use cookies to let us know when you visit our websites, how you interact with us, to enrich your user experience, and to customize your relationship with our website.

Click on the different category headings to find out more. You can also change some of your preferences. Note that blocking some types of cookies may impact your experience on our websites and the services we are able to offer.

These cookies are strictly necessary to provide you with services available through our website and to use some of its features.

Because these cookies are strictly necessary to deliver the website, you cannot refuse them without impacting how our site functions. You can block or delete them by changing your browser settings and force blocking all cookies on this website.

We also use different external services like Google Webfonts, Google Maps and external Video providers. Since these providers may collect personal data like your IP address we allow you to block them here. Please be aware that this might heavily reduce the functionality and appearance of our site. Changes will take effect once you reload the page.